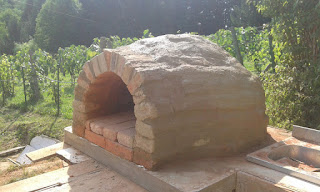 I mean, if we managed to pull this off, I don't see any imaginable reason why you, my dear imaginary friend, should fail to do it.


1. The clay needs to be harvested, bought, or stolen, about a week before building the oven, and kept in a container filled with water. This is important, because you don't want to work with hard clay, or crushing it manually while it is completely dry (well yeah, we tried that. I won't go into details, but let's just keep that day out of the public domain).


The purpose of the clay is the substitute for a standard commercial mortar. This home-made mortar is made by mixing the clay, the sand, and the water together.

The sand should be of fine granulation (have no idea what are formal English notions for types of sands).

How much? Even larger bunch. The theoretical clay:sand proportion is 1:3. So, if we consider for a moment that the clay volume statement makes sense and was indeed serious, than the amount of sand should be about 0.06 m3.

3. The bricks
The bricks are old-school, ancient, solid, and soil-based. No modern stuff. The old-school bricks can survive extreme temperatures developing in the pizza/bread ovens, and have no toxic, poisonous, radioactive, heavy metal-based, thrash or death-metal based, or cancer-causing ingredients.
Probably.

How much? For the oven which we built and presented in this article, we used about 100-130 pieces. Some of them we've managed to get for free, other ones we've found in local adverts for about 0.15$ per brick.

Dimensions of individual brick: about 30cm x 15cm x 7.5cm. There were also several smaller ones.

4. The alcohol.
How much?
If you remember the specifications for the sand quantities, use that.

5. The insulator.
What godda** motherfu***ng as***pe shi***ece insulator, you are surely thinking to yourself. Well, the thing is, you need to keep your oven insulated, so all the happy heat that you develop in it, mostly stay in it. We will insulate the top and sides of the oven with clay and wood shred/chips (explained later.. much later). But we also need to insulate the BOTTOM of the oven, so the heat does not escape through... the..
bottom.

Besides the stone/mineral/glass wool, you can also use glass bottles for the insulation layer. The glass itself is not much of the insulator according to the internet [internet, pp. 4654165467], but the air inside the bottles serve as a solid insulator. This will make the insulation layer considerably thicker, but it will do if you are in the desert, alone without stuff to buy, and you happen to have a bunch of empty glass bottles nearby, equipped with an extraordinary motivation to build a pizza oven.

Seriously, a friend made a very similar pizza and bread oven as this one, but using the glass bottles instead of the wool for the insulation layer, and the oven works in a way that we can't really tell the difference.

6. The bread and pizza oven FOUNDATION (base)
Yes, as it happens, the oven won't levitate in the proper altitude for some reason, and we suspect it has something to do with the Force and certain annoying glitches in the Standard Model.


Nevertheless, this did not made us stray, so we've prepared a solid, concrete base on the brick support, for an oven foundation. It is about 10cm thick, and has a metal armature mesh inside.

The pictures tell 0 words, but are more fun than a lots of words, and are fairly descriptive when it comes to building a pizza and bread oven.

The Complex Nature of the Home-Made Mortar

Start with laying the outline of the oven which will serve as its base.


You can also use cardboard templates (or anything similar) in order to visually help you with the brick arrangement.

Insulating the Bottom of the Oven

Use the mortar to join the bricks together. If you are working with insulating wool materials, you can also use the following steps (check the pics for more clarity):

We used aluminium foil because of the irrational fear that the wool might soak in the moist from somewhere (the rain), and this came to mind first. There should be smarter ways to do this. In some parallel universe, we surely did this like pros.

Lay the bricks over the insulator layer, making the oven floor, onto which, one day, hopefully, maybe, pizzas will be layed down in Celsius inferno.

IMPORTANT TIP: Use any tool necessary to make these floor bricks as smooth/straight/even as possible, because you don't want your pizza peels or pizzas themselves stuck in the unequal heights between individual bricks. But don't worry too much (some worry is always reasonable) about the space between the bricks - it will fill itself with the ashes in time.

The one important thing to keep in mind in the process of laying the bricks is the physical contact - always have in mind, especially when making the angles (and there will be lots of angles, because the oven is, or should be, well, round-ish), that bricks need to stay in physical contact at some point, regardless of the amount of mortar between them.

The idea is for the structure to hold itself, not to be dependent on the treacherous nature of the home-made mortar made in the foggy process of using Needed Material no. 4.

Than, start building up the oven. Use the mortar to glue them together, and keep the physical contact when making slopes. Use proper mortar quantity to adjust the angles.


REMEMBER, REMEMBER THE Physical Brick-Contact Rule:
"There Shall Always Be a Physical Contact Between Bricks."


Altough, it might also work just fine if there isn't one.
As you may guess, building pizza/bread ovens is not exactly a strict science process.

Oh, a small detail. We cut some of the bricks in half, so we could make more precise swerves.


How to make the arch?

Use anything that will keep it from crashing down until you place the one last "nailing" brick, or part of the brick.

Constructing the arch is the most demanding activity for one simple reason: gravity. After you've succeeded in this quest, anything is possible, including you surviving the suspicious bottle of local alcoholic experiment which you've acquired from a strange person lurking nearby.

Lay the bricks down until you finish. Use the mortar for angle adjustment.

The following steps are important:

To be completely honest, we have no idea what would exactly happen if you fail to follow these steps, but we've heard from one case that the oven was unable to heat itself to the working temperature, and was extremely difficult to cook any food in it. This makes sense, because the energy in this case is probably spent on drying the oven, instead of accumulating in it. Or does it? No idea.
Ask someone who speaks thermodynamics.

NOTE: The work on this oven is not concluded. We still need to insulate it with about 10cm clay + wood shreds mix. More about this on some other post.

UPDATE: A few people asked me for dimensions of the oven. Here is the picture.