This article title probably won't get me far on Google rankings, but I can't stop myself from counting money spent on these devices, which could actually feed me in some other universe.

Tablets everywhere. When I first saw the iPad, I considered it total and utter useless rubbish, and I kept asking myself, and the people and the pink alien around me, what is the deal with this touch-screen torso-less display which makes it sell so much?

... But then, other manufacturers started to sell gazillion of these devices.

Tablets are considered cool because you can take them with you on bathroom quests, use them in bed before sleeping, after sleeping and while sleeping, walk through thick crowd on a busy workday starring at their screen, go to concerts with them, avoiding school with them, talk to them, keeping beer bottles on them while drinking, cuddling them, care for them, and love them.

So, another mystery solved: these are the main reasons for tablets' popularity, proved by an unknown studies in some papers published on some scientific journals, or I've just made all these things up.

1. Expensive 32GB version, and 16GB is to small for all the useless crap which you can squeeze on it. No chance of expending the storage with microSD card - nice one, google.
Can't even recognize external storage without some 3rd party application (which is not free.. by default). So, you need to find this app somewhere in the vast lonely spaces of the Internet

2. Fingerprints. See the picture. Delightful, isn't it? All this space technology and still they refuse to implement some kind of a oleophobic display technology.

4. To small screen. Yes, it is too small, and it is scientifically proven [12]. You see what I've just did here? I've put some non-existing reference to back-up this claim. Look it up.
Anyway, widescreen doesn't help at all. And extra dedicated black spaces on the upper and lower parts of the screen, which are reserved for Android back/home/AltTab buttons and similar system stuff, are not helping either.

5. Laptop is more comfortable for having it in a lap and doing stuff. A tablet just falls around when you are trying to stabilize it on your body or somewhere on your sofa, bed, or toilet. So, you would need a stand of some kind.

7. While performing some more complicated stuff, it tends to heat up to the point that you can use it as a thermophor on cold winter nights.

8. Oh, it is fairly useless.
You can't honestly do anything serious on these devices. You can play some dull Android games (which at some point become alive at night and try to steal your money while you are daydreaming), you can read stolen magazines or comics on it, surf to the End of the Internet and back before your work shift ends, read your email, refresh your email and read it again, watch some movies, and that's about it. I can't even write blog articles without my veins popping out on my forehead when struggling to type on fictional key buttons which occupy more than half of the screen. Just to prove this point, let's see some example google inquiries: 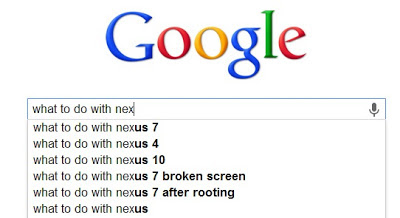 Oh yes, you can root it, and then things are probably start being fun for you.

I have bought some external Bluetooth keyboard (see the pic). I have bought stylus, every possible cable adapter, tablet stand and cover and a carrying bag. I have even connected a USB mouse to the tablet, just to make it more serious for doing some serious stuff which would make me some serious money, maybe, possibly, someday, probably not. And then it struck me - this is a laptop now. Why the hell do I need a tablet for, when I really need a laptop? And I have a laptop. So, I don't really need anything for now.

Anyone care to buy mine? Look how pretty it is:

Android is not ready for some useful utilization right now. Maybe that will change in the future, but for now, if you need a device for work, you need a Win/Linux PC or a notebook. Maybe even the apple thing, but I don't honestly know, never had enough money for them.

An android tablet is good enough only for things listed above, which are mainly for fun. And that it where  Google Nexus 10 truly excels (I've always wanted to use this word, it sounds like I know what I'm talking about). But for these things, honestly, there are far cheaper alternatives which work surprisingly well. They are, of course, performing somewhat lousier at certain operations (most of which you will not use everyday), but in some things they are even better (microSD support, USB host out of the box, ...)

What is more important, the easiness of carrying your tablet anywhere with you (toilet, bed, bar, dates, fishing, hiking, car theft, ...) is really not such a good thing. These are times which a person had for himself/herself and real social interactions, and now these minimized times are also threatened. With the coming era of waterproof gizmos, the time for ourselves with no external stimuli is on the downfall.

And maybe some other stuff, but I'm tired of writing for now. Actually, I need to take my Nexus and go to the bathroom now to surf some serious stuff while doing some more serious stuff.