I mean, I would really need to know what temperature is outside my cozy den when I wake up so I know what to dress and how to behave. Don’t really expect me to actually peek my head through the window, that would be insane. And it would be good to know about relative humidity also. And the pressure. And the moon phases. And wind, my god, the wind. 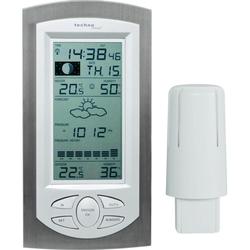 So what if the weather data on this thing is made up, based on some random numbers algorithm? All I need to get my dose of instant gratification when Internet is not nearby (>1.3m) is this:

AND of course, backlight. Regardless of environmental lightning, I can always dimm the artificial and daily lights so I could turn on this beautiful blueish feature.


AND one nice illustration of a frog wearing a hat. It just doesn't cut it without that frog.

I am trying to prove to you that you need this thing, although you already possess that knowledge, wish it or not, and to help you to choose when presented with multiple choice of various frogs with hats.

What features to look for when buying can be found in the good and the bad section.

You have a torso.

You have a torso, you buy at least one for every room. A guinea pig is not a prerequisite.